Art of Politics, Politics of Art, A Series By: Jeanette Joy Harris

In this series, Jeanette Joy Harris looks at how artists around the world are using public and participatory art forms to describe, analyze, and influence contemporary politics.

In May of 2018, Guatemalan national Claudia Patricia Gomez Gonzalez was shot at the US-Mexico border by patrols. The previous month, former Guatemalan military dictator and human rights criminal, Efrain Rios Montt died at the age of 91. Considering these two events together illustrates the struggle that Central Americans face as they deliberate between staying in countries with high levels of violence or risking immigration into the United States. Guatemalan artist Regina Jose Galindo has spent much of her career bringing international visibility to the very issues that these people deal with at home. Her performances are often brutal physical actions that reimagine environments that portray the social, political, and economic instability of many countries in Central America.

Galindo has had a special focus on Montt, exemplified by her performance “Quien Puede Borrar Las Huellas,” (“Who Can Trace These Tears”). The artist was outspoken when the former military leader ran for president of Guatemala in 2003. Early on election day morning, she went to a medical lab and purchased human blood. She poured it into a white basin and then, clothed in black, started a 45-minute walk that began outside the Constitutional Court in Guatemala City. It ended at the front steps of the National Palace. With each step she dipped her feet in the basin, leaving a trail of bloody prints behind her. As she faced security guards at the end of her pilgrimage, she left two final footprints and the basin as the final documentation of the work.

The genesis of Galindo’s work is rooted in 60-years of tumultuous Guatemalan history. In the 1940s Guatemala had seen significant social-democratic reforms, including substantial institutional resources for the indigenous and poor, but after a coup, backed by the US in 1954, the country saw a fluctuation between civilian and military leaders. In 1960, a civil war begun by liberal guerrillas broke out and the next thirty-six years saw the death or disappearance of over 200,000 people. Assassinations by firing squad, body mutilations, and the public dumping of bodies beset small villages; over 600 massacre sites have been identified. Eighty percent of the victims were the indigenous Maya, and in one region ninety per-cent of its population was erased. The majority of these killings happened during the seventeen-month period when Efrain Rios Montt was the military leader. This is why Galindo walked: in memory of those that Montt had killed and of the victims who were to come should he be elected.

Galindo has performed extensively throughout the world, but her work in the US has illuminated issues that pertain specifically to the immigrant experience through both literal and metaphoric actions. In a 2008 residency with San Antonio’s Artpace, Galindo’s “America’s Family Prison” commented on the rise of private correctional facilities in the US and their use in housing families who are seeking immigration resolution.

This past fall, Galindo’s work was exhibited in Los Angeles at Baik Art and Nuevo Museo de Arte Contemporáneo (NuMu). “Bearing Witness,” Galindo’s solo exhibition at Baik Art, included photos and videos from works like “Quien Puede Borrar Las Huellas.” On the last day of the exhibition, Galindo performed “Make America Great Again,” where her wrists were tied to a tree trunk in the gallery space.  An assistant, armed with a whip, was present in the space waiting for people to donate a dollar so Galindo could be punished. This action, a harsh commentary on the relationship between wealth creation and its justification of violence against the vulnerable, was clearly articulated in Trumpian rhetoric and left viewers like Unframed writer Jennifer Cernada feeling “vaguely confused and melancholic, but deeply and distinctly stirred.”

Galindo’s more unusual exhibition in Los Angeles was in connection with Guatemala City’s NuMu and LACMA.  A small, egg-shaped structure, NuMu can only hold 4 people at a time and it serves as the only contemporary museum in Guatemala. A replica was made of this former egg vending shop and, with the help of Kickstarter, the museum travelled from Guatemala City to Los Angeles via Oaxaca, Mexico City, Guadalajara, and Joshua Tree. The museum opened up its exhibition space to communities along the way. “Retrospective: A Solo Exhibition by Regina Jose Galindo,” was one of two shows that rotated in the space. Photographs of previous actions, including “Make America Great Again” were displayed.

Galindo’s exhibitions in LA are powerful additions to current conversations on US immigration. Her work reflects the vulnerability of non-US nationals who are significantly impacted by the policies executed by the current administration.  Through her actions and their documentation, Galindo illustrates the type of Central American environment that motivates immigration to the US despite the tremendous risks involved, especially from the point of view of women.

Much of Galindo’s work has focused specifically on violence against women and girls, including two of her performances at the 2005 Venice Biennale. In “(279) Blow,” Galindo whipped herself 279 times, mirroring the deaths of the 279 Guatemalan women who had been murdered that year to date. In the same festival, Galindo engraved the word “perra” (“bitch”) into her thigh with a knife in order to speak on behalf of women who had been murdered and/or mutilated with that same word carved into their body. (Documentation of “perra” was included in the Baik Art exhibition.) Galindo’s advocacy on behalf of women seems to coincide with the case that groups like the Washington Office of Latin America (WOLA)  and Kids in Need of Defense (KIND) make for the sheltering of women and children through the use of refugee status. These groups contend that because of their vulnerability, women and children as a “social group” are specific targets of violence. They make this claim under Section 1101(a)(42) of the Immigration and National Act (INA), which defines a refugee as a person who has experienced or fears persecution by a government actor based on the person’s race, religion, nationality, political opinion, or their membership in a particular social group.

The growing exposure of Galindo’s work in the US is well-timed as polarization between conservative and liberal interpretations of INA seems greater than ever, leaving thousands of people in legal limbo. Her performance of the body as a vulnerable place where empathy, outrage, and compassion can be shared among a diverse group of people has the potential to make lawmakers and their constituents more aware of the lives of people who go unnoticed and unprotected.

But using performance as an educational tool is also problematic. To the degree that Galindo’s works, like “perra” and “(279) Blows”, communicate violence inflicted upon a women in Guatemala, it also universalizes suffering. That universalization might have a negative impact on how her work affects attitudes about US policy; e.g., if suffering is a human, not national, condition, why would certain victims, over others, receive the privileged status of “refugee” and be granted asylum?  Practically speaking, the US cannot take in every person who is a victim of violence. This leaves the US with the task of determining what is systemic violence and who deserves asylum under the terms of INA.

It is important to understand, however, that Galindo has repeated throughout her career that she is an artist, not a political activist. She would most certainly contest the use of her art as an educational tool, and perhaps she would be right to. While her works may evoke empathy, feelings are not enough to implement change. Political theorist Leo Strauss described political action as that which aspires to either maintain or change existing conditions. Galindo’s enactments of events through performance are not vehicles for political action but, through the reaction its incites in others, it could certainly be its catalyst.

Galindo creates works based on her experiences and sense of justice but not with an end point in mind. While her works are uncontestably political in content, they are not political actions, in and of themselves. But whether she is an activist or not, Galindo’s voice is an important addition to conversations about the United States’ controversial immigration policies, and I hope that her works, and the works of others like her, continue to be shown in this country.

As Galindo demonstrates, the artist can be an advocate, telling stories in an environment that extends beyond public partisan spaces. She can tap into the kindness that is at the core of our humanity and initiate people to take action. If she can do that, the distinction between her status as artist or activist is arguably less important than the effects of her work.

Kids in Need of Defense (KIND) is an organization comprised of  pro bono attorney partners at law firms, corporations, and law schools nationwide that represents unaccompanied immigrant and refugee children in their deportation proceedings. If you are interested in supporting KIND, please visit their website.

“Quien Puede Borrar Las Huellas,” (“Who Can Trace These Tears”) 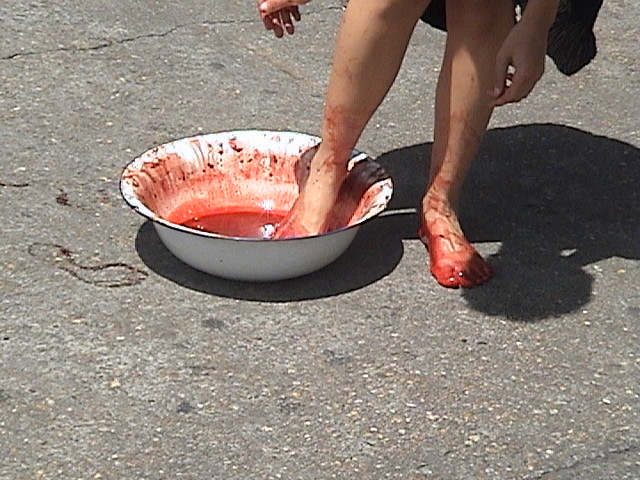 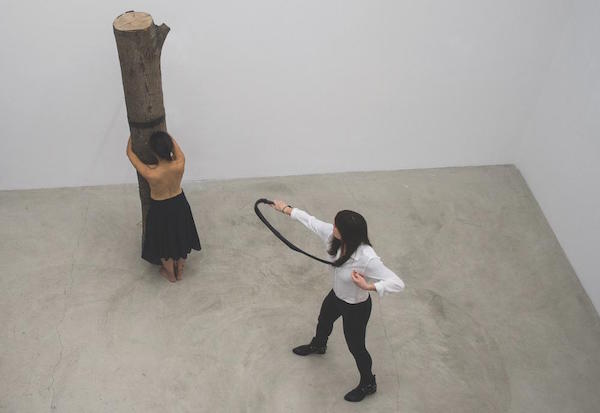