Bare Breasts, but no Bunga Bunga

Art of Politics, Politics of Art, A Series By: Jeanette Joy Harris

In this series, Jeanette Joy Harris looks at how artists around the world are using public and participatory art forms to describe, analyze, and influence contemporary politics.

The re-emergence of Silvio Berlusconi in the recent Italian election was protested by FEMEN, the “sextremist” group that uses bare breasts to bring attention to feminist issues. As a piece of political performance art, FEMEN’s action against the infamous lethario is powerful, and representative of how the art world is using exhibition space to demonstrate its concern the future of Italy.

A cocksure Silvio Berlusconi strode into his local polling station on Sunday, March 4th to vote in Italy’s General Election. He had dressed for the occasion. His black suit and sculpted hair was met by photographers who crowded the room as he checked in at tables manned by officials who still use paper ledgers to determine voter eligibility.[1] Berlusconi planned to vote for Forza Italia, the center-right political party he founded in 1993, which maintained dominance during his four-term tenure as Prime Minister. Forza Italia, in alliance with Matteo Salvini’s League Party, hoped to win a majority and oust Matteo Renzi and the Democratic Party.[2]

Berlusconi’s path was suddenly crossed by a bare breasted woman in black pants and heavy boots. With her arms extended defiantly in the air, the woman yelled “Berlusconi, sei scaduto!” (Berlusconi, time’s up!), the same message that was written on her chest.  Kicking and screaming the woman was then quickly removed.

The protestor was a member of FEMEN, and this was not the first time that the feminist organization had shown up to greet Berlusconi. They had staged a similar protest against him in 2013. [3]

Loved and loathed, Berlusconi is a living myth. He started his business career in the 1960s and since that time has built a fortune worth 7.0 billion USD, with most of his wealth attributed to numerous media holdings. His involvement in politics dates to 1994 and he was the longest serving Prime Minister after Benito Mussolini.[4] His political career was beset with scandals, and in the last decade he has been convicted on various charges of tax fraud and bribery. What makes Berlusconi so infamous, though, is not the corruption, but his “bunga bunga” parties, where he would socialize with swarms of beautiful young women, many receiving monetary “gifts” at the end of the night.

Make no mistake, Berlusconi loves beautiful women. In fact, while in office, he made a habit of recruiting velinas (showgirls) for government positions.[5] Veronica Lario, his second wife, was so exasperated by his deference to gorgeous but unqualified women that she wrote an open letter to the press criticizing her husband for his method in choosing party candidates.[6] One example of this is Nicole Minetti who was elected to a regional government position in 2010. After taking office, her responsibilities included the procurement of prostitutes for Berlusconi’s “bunga bunga” parties, a duty that led to her conviction by the Court of Milan in 2013.[7]

Minetti’s charges were wrapped up in Berlusconi’s larger scandal with underage Karima El Mahroug (aka Ruby the Heartstealer). This was the case that led to his conviction for abuse of power and suspension from Italian politics.[8] But the suspension proved fleeting. Undeterred, Berlusconi reemerged full of swagger for the 2018 elections. Though not running for office himself, his formidable history and charming presence made an effect at the polls.

Berlusconi is a perfect target for FEMEN. This international organization promotes “sextremism” which they describe as “female sexuality rebelling against patriarchy and embodied in the extreme political direct action events.[sic]”[9] With highly articulated political and philosophical positioning, FEMEN is an extreme group that stages protests around the world using bare breasts to bring visibility to feminist issues. They claim to be powerful inheritors of the Amazon tradition, adorned with crowns of flowers but prepared with the physical and psychological training to overthrow governments. Their objectives are far reaching with targets ranging from the Islamic State to the Catholic Church. They want to eradicate prostitution and suppress pornography all while creating a “new aesthetics for women’s revolution.”[10]

FEMEN’s performative style seems ironic. Protesting against the objectification of the female body through its public display may seem a contradiction, but this methodology has been utilized by performance artists like Carolee Schneemann and activists like Gloria Steinem since the 1960s. “Interior Scroll” featured a naked Schneeman pulling a manifesto transcribed onto a long piece of paper from her vagina all while reading it to the audience. Steinem’s major breakthrough article was a two-part expose about her infiltration of the Playboy Club in New York City as a Bunny. 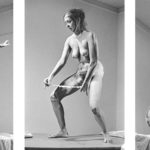 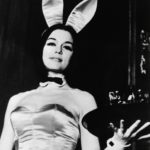 FEMEN seems to fall somewhere in between. Their use of nudity for its capacity to start conversations is less artistic and nuanced than Schneemann but their actions are more widely publicized. Although they, too, are outraged by the institutionalized objectification and commodification of the body, their response is more radical than intellectual.

FEMEN’s topless protestors seem a bit banal compared to Schneemann and Steinem but they are an example of the growing popularity and success of using the body as a location for substantial political dialogue. Judith Butler in Notes Toward a Performative Theory of Assembly discusses how the body is a potent way to address issues like gender because it is inherently embodied. Words cannot coherently express their condition and so sometimes appearing is, in itself, political.

In the context of Berlusconi, FEMEN’s strategy as a political body exemplifies Butler’s thesis and is highly effective. Far from engaging the female body in a mating ritual, the video of Berlusconi at the polling booth shows him fearfully darting away. As the protestor was removed by police officers, he sheepishly returns. This is remarkable for a man who commented in 2011 that “When asked if they would like to have sex with me, 30% of women said, ‘Yes’ while the other 70% replied, ‘What, again?”[11]

Protests by FEMEN and other groups only begin to scratch the surface of Italy’s puzzling relationship with women. In 2011, after Berlusconi’s scandal with El Mahroug was revealed, Italian journalist Concita de Gregorio’s manifesto published in L’Unita launched the “Se Non Ora Quando” (“If not now, when?”) movement, which resulted in over one million people demonstrating for women’s rights throughout Italy.[12] But when Italian actress Asia Argento joined the #metoo conversation earlier this year by discussing her own experiences with Harvey Weinstein, she was so violently criticized that she had to leave Italy.[13]

Though directed at Berlusconi and “bunga bunga” culture specifically, FEMEN’s protest actions represent a more widespread and circumspect evaluation of Italian politics in the art world. If curators have the ability to tap into a cultural zeitgeist, then there is no coincidence that exhibitions currently on view at two of Italy’s major institutions discuss art and politics. After an election that demonstrated the strength of nationalism and neo-fascist attitudes, shows at Fondazione Prada and Palazzo Strozzi that give an overview of artistic life in twentieth century Italy both during Mussolini’s dictatorship and the period after his death, almost warn Italy and the world what could lie ahead.

Exhibitions at Fondazione Prada and Palazoo Strozzi surely have more cultural clout than outsiders like FEMEN but their academic and institutionalized critiques can lack the power of embodied ephemeral protest activities. One example is Felice Casorati who is highlighted in “Post Zang Tumb Tuuum. Art Life Politics: Italia 1918 – 1943.” Casorati was an early twentieth century painter arrested for anti- fascist political leanings, which he later abandoned to avoid problems with Mussolini’s government. His work influenced by Symbolists and the Renaissance masters provide a stoic but poignant counterpoint to FEMEN’s bare breasts. In “Imparare” a school girl covers her chest in a pledge of allegiance, questioning the meaning of her political world. In “Santina” a young girl sits in a chair, hand over her chest as she stares squarely and existentially at us. In “Eccolo” a young woman, hand clasped over her heart, ponders the consequences of her single, revealed breast. In these three separate works, Casorati illustrates what FEMEN defines in one powerful if fleeting action, the deep and painful oblivion that can arise within the body politic. Though Berlusconi’s protestor might have had a more literal interpretation in mind, FEMEN illustrates the desire for authentic political action, the necessity of independent thought, and the acceptance of the body as the foundation of our shared world, all of which are told through Casorati’s moving portraits. 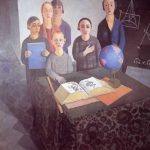 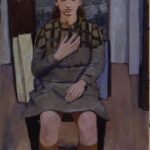 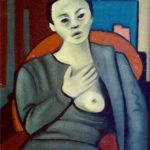 FEMEN’s bare breasts at the poll were not the type of reception that Berlusconi had hoped for. In his 80s, he still exudes a sexual presence that seems, at best, uncomfortable. Yet Italian women swoon at his charisma, and he is a reminder of the Italy that adored Sophia Loren and celebrated La Dolce Vita. FEMEN protests an Italy where, in 2017, women made up 16% of political decision-making bodies and 59% of murdered women were victims to their current or former partner.[14] The nationalistic and fascist rhetoric in the 2018 election was focused more on immigration than women’s issues and it is impossible to see a new Italian government that, like Mussolini, pressures women to stay home and procreate. No matter, the world waits to see how Italy forms its new government, and it seems like the art world will be ready to comment.[15]

Jeanette Joy Harris is a Houston-based artist, writer, curator and speaker interested in the intersection of performance and political dialogue. Joy completed her MscR in history of art at University of Edinburgh College of Art and a BA in government, with a minor in philosophy, from Texas Woman’s University. She has presented papers at University of Cambridge, University of Brighton, and University of Edinburgh. She regularly guest lectures at Texas Woman’s University and University of North Texas. Joy has shown work in London, the Netherlands, Venice (IT), Brindisi (IT), Los Angeles, San Francisco, Portland, Miami, Chicago, and Houston. She will be presenting a paper on Spencer Tunick and Hannah Arendt’s idea of political isolation at the 2018 Hannah Arendt Circle.

[1] Description of scene pulled from video footage from Reuters. https://www.reuters.com/video/2018/03/04/femen-activist-interrupts-berlusconis-vo?videoId=406126074